Zanzibar Examination Council (ZEC), which is responsible for administering national examinations, is in the process of revamping the current system. The proposed changes are aimed at improving the quality of examinations and making them more aligned with the needs of the country. One of the key changes is the introduction of a new grading system for the National Examination. Under the new system, there will be five grades: A, B, C, D, and E.

How ZEC is Improving the National Exam Awarding System

As the new academic year approaches, the Zanzibar Examination Council has announced an improved system for awarding grades for the National Examination. These changes come after concerns were raised about the fairness of the previous system, which some students felt was biased.

The new system, which has been developed with the help of experts, will be more transparent and will take into account a wider range of factors when awarding grades. This should ensure that the grades awarded are more accurate and fair.

The Zanzibar Examination Council is committed to ensuring that all students have a fair chance of success in their exams. These changes are a step in the right direction, and we are confident that they will lead to improved results for all students.

Processing Form Two Exam results will adhere to standards for marks, grades and the use of continuous assessment (CA) marks, as outlined in the table below.

The results of the Primary Education Examination will be processed and analyzed according to the grade levels and grades indicated in the table below. 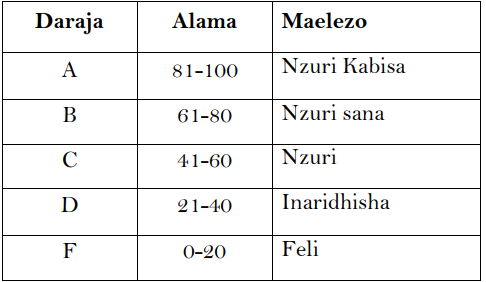 The results of the Nursery Primary Education Exam will be processed and evaluated according to the grade levels and grades indicated in the table below. 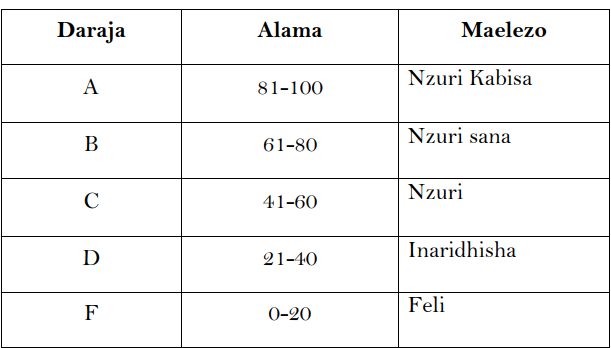 The Zanzibar Examination Council (ZEC) has released the new passing grades for Form Two students. The new grades will come into effect for the 2022 academic year.
Grades will be in the form of Division, Total Score (Total Point Grading System) and average. A candidate who did at least 7 subjects for the Second Form will be awarded Grade I, II, III or IV according to the total score (Point) as seen in table 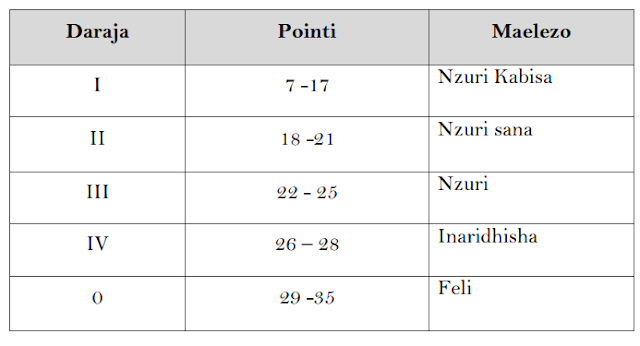 A candidate who has attempted the exam under seven subjects will be considered to have passed if they receive a minimum passing grade of Division IV in at least two subjects, or one subject at Level A, B, C or D. 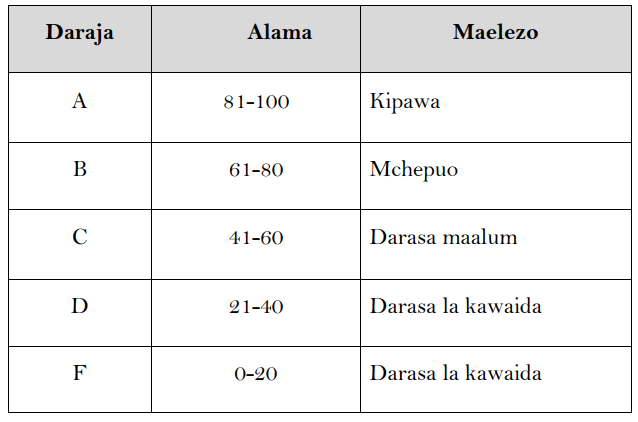 The candidates who took the Standard IV National Examinations will be evaluated based on their average score. The continuous score (CA) will make up 30% of the final exam score (FE), with the FE score itself being 70%. The following table shows the score contribution analysis for Form Two and Standard VII CA scores.

Table. Continuity of marks for  Form II and Standard VII

Note
In conclusion, the Zanzibar Examination Council's results are awarded according to a graded structure of total marks (Division) and the average score. This system will be implemented for National exams in 2022 in order to address challenges and complaints about results. This will hopefully reduce complaints and challenges of results from stakeholders in education.
SWAHILI DOCUMENT